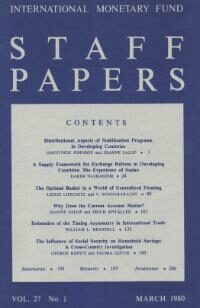 IMF Staff papers: Volume 27 No. 1
International Monetary Fund. Research Dept.
This paper reports the results of some preliminary research into the repercussions, for income distribution, of stabilization programs associated with the use of IMF resources in the upper credit tranches. In the first section, it explores the relationship between the balance of payments and the distribution of income from a theoretical perspective. The general concern is whether adjustment influences the distribution of income in some systematic manner; the concern is to delineate the conditions under which a decline in the real wage is necessary for adjustment actually to take place. Using neoclassical analysis, one finds that the ratio of the nominal wage to the price of exports must decline, but whether this involves a fall in the overall real wage depends on many variables, including the relative proportions of traded and nontraded goods in the consumer's market basket. Second, it presents a qualitative analysis of the distributional effects of the measures that tend to be included in these programs, viz., ceilings on net credit expansion, currency depreciation, and the relaxation and simplification of exchange restrictions and controls.