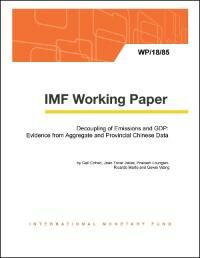 Decoupling of Emissions and GDP: Evidence from Aggregate and Provincial Chinese Data
Gail Cohen, João Tovar Jalles, Mr. Prakash Loungani, Ricardo Marto, and Gewei Wang
We provide a comprehensive analysis of the relationship between greenhouse gas (GHG) emissions and GDP in China using both aggregate and provincial data. The Kuznets elasticity is about 0.6 for China, higher than that in advanced countries but below that of major emerging markets. The elasticity is somewhat lower for consumption-based emissions than for production-based emissions, providing mild evidence consistent with the “pollution haven” hypothesis. The Kuznets elasticity is much lower for the last three decades than for the three previous decades, suggesting a longer-term trend toward decoupling as China has become richer. Further evidence of this comes from provincial data: richer provinces tend to have smaller Kuznets elasticities than poorer ones. In addition to the trend relationship, we find that the Environmental Okun's Law holds in China.