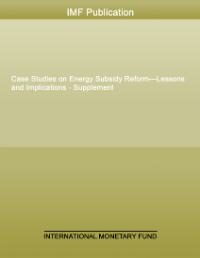 Case Studies on Energy Subsidy Reform—Lessons and Implications - Supplement
International Monetary Fund
This supplement presents country case studies reviewing energy subsidy reform experiences, which are the basis for the reform lessons identified in the main paper. The selection of countries for the case studies reflects the availability of data and of previously documented evidence on country-specific reforms. The 22 country case studies were also chosen to provide cases from all regions and a mix of outcomes from reform. The studies cover 19 countries, including seven from sub-Saharan Africa, two in developing Asia, three in the Middle East and North Africa, four in Latin America and the Caribbean, and three in Central and Eastern Europe and the CIS. The case studies are organized by energy product, with 14 studies of the reform of petroleum product subsidies, seven studies of the reform of electricity subsidies, and a case study of subsidy reform for coal. The larger number of studies on fuel subsidies reflects the wider availability of data and past studies for these reforms. The structure of each case study is similar, with each one providing the context of the reform and a description of the reforms; discussion of the impact of the reform on energy prices or subsidies and its success or failure; mitigating measures that were implemented in an attempt to generate public support for the reform and offset adverse effects on the poor; and, finally, identification of lessons for designing reforms.