Mauritius: Selected Issues
International Monetary Fund. African Dept.
This paper discusses how Mauritius is currently dealing with two separate tax transparency and anti-avoidance initiatives, one by the OECD-G20 and one by the European Union. Under the BEPS initiative, Mauritius has committed to including minimum standards and possibly other BEPS-compliant features into its domestic laws and bilateral double taxation avoidance agreements (DTAs). Mauritius has been involved in intensive DTA negotiations and re-negotiations. Sixteen DTAs have been added in the past 6 years. Arguably, even more important for investors has been the favorable tax framework offering benefits that are in part being challenged. Mauritius currently has a 15 percent corporate income tax (CIT) rate and a worldwide system that taxes foreign earnings but allows for foreign tax credits (FTCs), including the contested Deemed Foreign Tax Credit. Important macrofinancial linkages between the GBC sector and the financial sector present vulnerabilities that need to be managed carefully. The GBC sector is a major provider of inexpensive funding to banks, but by nature of the GBC investment pattern, these deposits are potentially highly volatile. 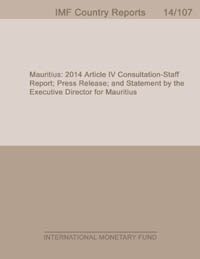 Mauritius: Staff Report for the 2014 Article IV Consultation
International Monetary Fund. African Dept.
This 2014 Article IV Consultation highlights that with subdued international prices, inflationary pressures in Mauritius declined in 2013, despite the public sector wage increases. The unemployment rate was unchanged compared with 2012 at 8 percent. Credit to private sector growth remained robust. On the external front, the current account deficit widened to almost 10 percent of GDP in 2013. The reserve cover of imports of goods and services stayed constant at 4½ months with the Bank of Mauritius accumulating additional net international reserves. The structural primary deficit was broadly unchanged relative to 2011.

The Data Dissemination Initiative was launched in the mid-1990s as part of a broader internationally-agreed-upon initiative to strengthen transparency and promote good governance practices by establishing standards and codes. Ten years later, the initiative is viewed as an integral part of the international financial architecture, and is considered to have improved the functioning of international financial markets and contributed to global financial stability. This volume reviews certain aspects of the development of and experience with the initiative over the past decade, and concludes by reflecting on potential challenges ahead and possible enhancements.