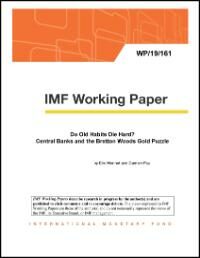 Do Old Habits Die Hard? Central Banks and the Bretton Woods Gold Puzzle
Eric Monnet and Mr. Damien Puy
Why did monetary authorities hold large gold reserves under Bretton Woods (1944–1971) when only the US had to? We argue that gold holdings were driven by institutional memory and persistent habits of central bankers. Countries continued to back currency in circulation with gold reserves, following rules of the pre-WWII gold standard. The longer an institution spent in the gold standard (and the older the policymakers), the stronger the correlation between gold reserves and currency. Since dollars and gold were not perfect substitutes, the Bretton Woods system never worked as expected. Even after radical institutional change, history still shapes the decisions of policymakers.