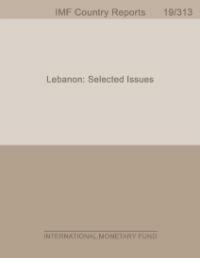 Lebanon: Selected Issues
International Monetary Fund. Middle East and Central Asia Dept.
This Selected Issues paper studies the inefficiencies related to the electricity sector and assesses the potential impact of the 2019 reform plan. Electricity shortages are the second constraint to competitiveness reported by businesses in Lebanon, based on the Enterprise Survey conducted by the World Bank. Lebanon’s electricity sector performance is worse than other similar countries in the region. Many businesses must rely on costly private generators. Income inequalities are exacerbated by both the geographical disparities in Electricité du Liban’s (EdL) electricity provision and its tariff structure. The most vulnerable households are the small consumers located in regions with little electricity provision from EdL. A new electricity plan was approved by Cabinet on April 9, 2019 and ratified by Parliament on April 17, 2019. Although it is critical that the plan is decisively implemented, it is also important that it is enhanced further to fully restore EdL’s viability. Introducing well-targeted measures, such as cash transfers, would help protect the most vulnerable households from the tariff increase. As planned in the reform package, consumer tariffs should be indexed on the evolution of input prices to guarantee that it will not be negatively impacted by future developments in fuel or gas prices.