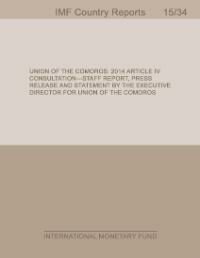 Union of the Comoros: Staff Report for the 2014 Article IV Consultation
International Monetary Fund. African Dept.
KEY ISSUES • The Comorian economy continues to grow although at a slightly slower pace. Economic growth in 2014 is projected at 3.3 percent, adversely affected by electricity disruptions and slower-than-expected implementation of the public investment program. Inflation has remained subdued. Staffs’ baseline assumption is that real GDP growth will average around 4 percent per annum over the medium term, provided reforms are implemented. • Implementation of the 2014 budget was challenging, particularly after mid-year. While revenues were broadly on target, resources were inadequate to meet the higher- than-budgeted wage bill resulting from an increase in teacher salaries in March and previously un-budgeted expenditures, including on elections. Domestically-financed investment spending was severely constrained and temporary arrears were incurred on salaries and external debt. • The key short-term challenge is to find a better balance between available resources and expenditures so that arrears can be avoided. Spending plans need to be based on realistic expectations of the resources likely to be available. The 2015 budget is premised on this principle but the scope for domestically-financed investment is inadequate as obligatory spending on wages and salaries and debt service absorbs most of domestic revenue. • For the medium-term the key challenges are to create fiscal space for infrastructure investment and social spending, accelerate inclusive growth and employment generation, and reduce poverty. The authorities need to focus their efforts on strengthening revenue administration and public financial management to expand fiscal space and improve transparency. Weaknesses in the business environment, including inadequate infrastructure, especially in the energy sector, and difficulties in contract enforcement represent important challenges.