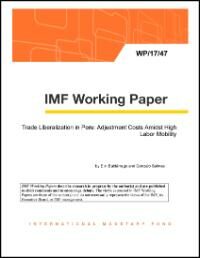 Trade Liberalization in Peru: Adjustment Costs Amidst High Labor Mobility
Elin Baldárrago and Mr. Gonzalo Salinas
While trade integration has been an engine of global growth and prosperity, as suggested by theory, some sectors have been negatively affected by increased import competition. We test if this negative effect is significant in a context of high intranational migration, as theory indicates that labor mobility could reduce it. We focus on the 2004-14 period of trade liberalization in Peru (a major beneficiary of trade integration), which allows for methodological improvements relative to similar studies. We find that districts competing with liberalized imports experienced significantly lower growth in consumption per capita despite some emigration in response to increased import competition. This underscores the need to support the “losers of trade liberalization” even amidst high labor mobility.