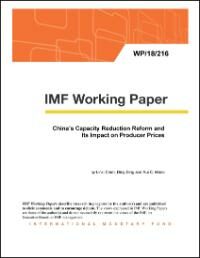 China’s Capacity Reduction Reform and Its Impact on Producer Prices
Linxi Chen, Ding Ding, and Rui Mano
In late 2015, the Chinese authorities launched a policy to reduce capacity in the coal and steel industries under the wider effort of Supply-Side Structural Reforms. Around the same time, producer price inflation in China started to pick up strongly after being trapped in negative territory for more than fifty consecutive months. So what is behind this strong reflation—capacity cuts in coal and steel, or a strengthening of aggregate demand? Our empirical analyses indicate that a pickup in aggregate demand, possibly due to the government’s stimulus package in 2015-16, was the more important driver. Capacity cuts played a role in propping up coal and steel prices, explaining at most 40 percent of their price increase.