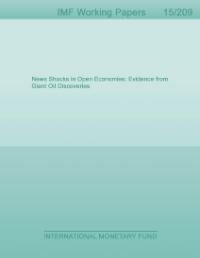 News Shocks in Open Economies: Evidence from Giant Oil Discoveries
Mr. Rabah Arezki, Valerie A Ramey, and Liugang Sheng
This paper explores the effect of news shocks on the current account and other macroeconomic variables using worldwide giant oil discoveries as a directly observable measure of news shocks about future output ? the delay between a discovery and production is on average 4 to 6 years. We first present a two-sector small open economy model in order to predict the responses of macroeconomic aggregates to news of an oil discovery. We then estimate the effects of giant oil discoveries on a large panel of countries. Our empirical estimates are consistent with the predictions of the model. After an oil discovery, the current account and saving rate decline for the first 5 years and then rise sharply during the ensuing years. Investment rises robustly soon after the news arrives, while GDP does not increase until after 5 years. Employment rates fall slightly for a sustained period of time.