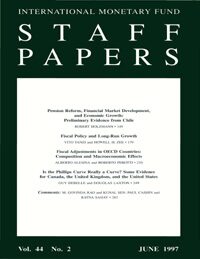 IMF Staff papers: Volume 44 No. 2
International Monetary Fund. Research Dept.
The Chilean pension reform of 1981, a shift from cm unfunded to a funded scheme, is considered to have contributed to this country’s excellent economic performance. Positive growth effects allow, in principle, a Pareto-improving shift in pension financing. This paper highlights the theoretical underpinnings of the reform and presents empirical data and preliminary econometric testing of the conjectured reform effects on financial market developments, as well as the impact on total factor productivity. capital formation, and private saving. The empirical evidence is consistent with most but not all claims. In particular, the direct impact of the reform on saving was low, and initially even negative. 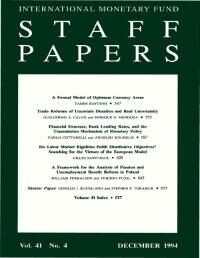 IMF Staff papers: Volume 41 No. 4
International Monetary Fund. Research Dept.
The paper presents a model of optimum currency areas using a general equilibrium approach with regionally differentiated goods. The choice of a currency union depends upon the size of the underlying disturbances, the correlation between these disturbances, the costs of transactions across currencies, factor mobility across regions, and the interrelationships between demand for different goods. It is found that, while a currency union can raise the welfare of the regions within the union, it unambiguously lowers welfare for those outside the union. [JEL F33, F36] 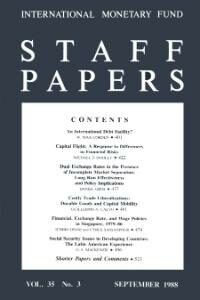 IMF Staff papers: Volume 35 No. 3
International Monetary Fund. Research Dept.
The proposal to set up an international debt facility to buy the debt of developing countries at a discount and then mark down its contractual value is analyzed. The paper considers the central question of how the debtor countries, creditor banks, and owners of the facility would be affected; in particular, what redistribution of gains and losses there would be among them. The “market price effect” and the “ceiling effect” are distinguished. A crucial consideration is whether debt retained by banks is subordinated to debt bought by the facility. 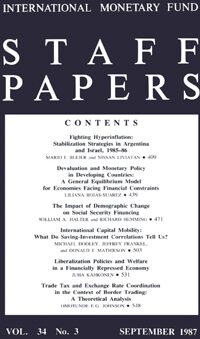 IMF Staff papers: Volume 34 No. 3
International Monetary Fund. Research Dept.
In the middle of 1985 Argentina and Israel launched frontal attacks on inflation which succeeded in reducing it drastically during the first year without very significant costs in employment and output. Despite basic differences in the countries’ structures, the programs were similar in their design and their effects. This paper covers some of these similarities in the implementation and the results of the two stabilization programs, and analyzes the rationale of the underlying conception of the plans. The focus is on the strategy for the transitional period, and the ability of the programs to sustain price stability.