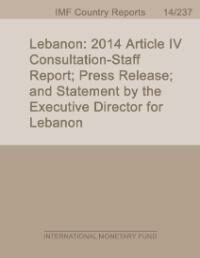 Lebanon: Staff Report for the 2014 Article IV Consultation
International Monetary Fund. Middle East and Central Asia Dept.
KEY ISSUES Context: The economy is being severely tested by the Syria crisis. The refugee influx has reached one quarter of the population, fueling already high unemployment and poverty. The political impasse from the presidential elections—following months of negotiations over a new government—adds to the uncertainty. The economy is meanwhile suffering from a broad-based deterioration, with subdued growth and widening fiscal imbalances. Public debt is on the rise. Progress on structural reforms has been limited. On the positive side, deposit inflows have held up and foreign exchange reserves are sizeable; and security conditions have significantly improved, lifting tourism prospects. Key challenges: There is an urgent need for fiscal adjustment to achieve a sustainable debt reduction, and structural reforms to boost growth and address social inequities. Key policy recommendations: • Fiscal policy. The immediate priority is to stop the fiscal deterioration and return to primary surpluses, to avoid a possible loss of market confidence and put debt on a sustainable path. The consolidation strategy should minimize the impact of a planned salary increase for the public sector; include broad-based and non- distortionary revenue measures; and rebalance expenditure away from electricity transfers toward capital and social spending, to promote inclusive growth. Passing a budget for 2014 would help anchor confidence. Fiscal management should be strengthened and anchored in a medium-term perspective. • Monetary policy. The Banque du Liban (BdL) should continue to maintain high foreign exchange reserves as a buffer and signal of commitment to macro-financial stability. It should gradually withdraw from T-bill auctions, and adopt a strategy to improve its balance sheet over time. • Financial sector. Capital buffers should be strengthened, and the loan classification and restructuring rules and the AML/CFT regime further enhanced. • Structural reforms. Reforms in the electricity sector and the labor market are imperative to address current competitiveness pressures, lay the foundations for higher-productivity growth, and improve social conditions. • Refugee crisis. Lebanon cannot shoulder the costs of the massive inflow of Syrian refugees alone, and international budget support is needed. Strong government commitment to adjustment and reforms—along with a concerted policy framework to deal with the refugee crisis—would bolster credibility and help mobilize support.