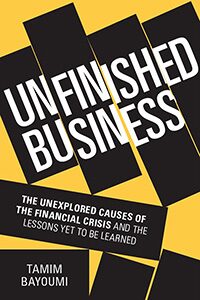 Unfinished Business
The Unexplored Causes of the Financial Crisis and the Lessons Yet to be Learned
Mr. Tamim Bayoumi

There have been numerous books examining the 2008 financial crisis from either a U.S. or European perspective. Tamim Bayoumi is the first to explain how the Euro crisis and U.S. housing crash were, in fact, parasitically intertwined. Starting in the 1980s, Bayoumi outlines the cumulative policy errors that undermined the stability of both the European and U.S. financial sectors, highlighting the catalytic role played by European mega banks that exploited lax regulation to expand into the U.S. market and financed unsustainable bubbles on both continents. U.S. banks increasingly sold sub-par loans to under-regulated European and U.S. shadow banks and, when the bubbles burst, the losses whipsawed back to the core of the European banking system. A much-needed, fresh look at the origins of the crisis, Bayoumi’s analysis concludes that policy makers are ignorant of what still needs to be done both to complete the cleanup and to prevent future crises.