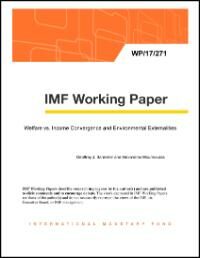 Welfare vs. Income Convergence and Environmental Externalities
Mr. Geoffrey J Bannister and Mr. Alex Mourmouras
We present estimates of welfare by country for 2007 and 2014 using the methodology of Jones and Klenow (2016) which incorporates consumption, leisure, mortality and inequality, and we extend the methodology to include environmental externalities. During the period of the global financial crisis welfare grew slightly more rapidly than income per capita, mainly due to improvements in life expectancy. This led to welfare convergence in most regions towards advanced country levels. Introducing environmental effects changes the welfare ranking for countries that rely heavily on natural resources, highlighting the importance of the natural resource base in welfare. This methodology could provide a theoretically consistent and tractable way of monitoring progress in several Sustainable Development Goal (SDG) indicators.