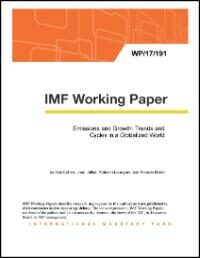 Emissions and Growth: Trends and Cycles in a Globalized World
Gail Cohen, João Tovar Jalles, Mr. Prakash Loungani, and Ricardo Marto
Recent discussions of the extent of decoupling between greenhouse gas (GHG) emissions and real gross domestic product (GDP) provide mixed evidence and have generated much debate. We show that to get a clear picture of decoupling it is important to distinguish cycles from trends: there is an Environmental Okun's Law (a cyclical relationship between emissions and real GDP) that often obscures the trend relationship between emissions and real GDP. We show that, once the cyclical relationship is accounted for, the trends show evidence of decoupling in richer nations—particularly in European countries, but not yet in emerging markets. The picture changes somewhat, however, if we take into consideration the effects of international trade, that is, if we distinguish between production-based and consumption-based emissions. Once we add in their net emission transfers, the evidence for decoupling among the richer countries gets weaker. The good news is that countries with underlying policy frameworks more supportive of renewable energy and supportive of climate change tend to have greater decoupling between trend emissions and trend GDP, and for both production- and consumption-based emissions.