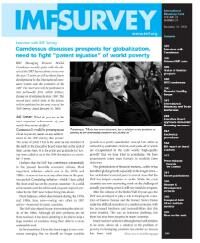 IMF Survey: Volume 28, Issue 23
International Monetary Fund. External Relations Dept.
IMF Managing Director Michel Camdessus recently spoke with the editors of the IMF Survey about events over the past 13 years, as well as about future developments in the international monetary system and the evolution of the IMF. The interview will be published in two parts—the first, which follows, focuses on developments since 1987. The second part, which looks to the future, will be published in the next issue of the IMF Survey, dated January 10, 2000.