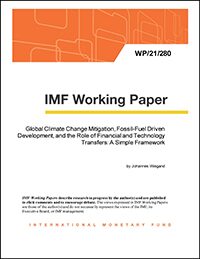 Global Climate Change Mitigation, Fossil-Fuel Driven Development, and the Role of Financial and Technology Transfers: A Simple Framework
Mr. Johannes Wiegand
Climate financing and compensation have emerged as key themes in the international climate mitigtion debate. According to one argument in support of compensation, advanced economies (AEs) have used up much of the atmosphere’s absorptive capacity, thus causing global warming and blocking a similar, fossil-fuel driven development path for emerging markets and developing economies (EMDEs). This paper develops a simple model of a sequential, fossil-fuel driven development process to discuss these issues systematically. The results suggest: (i) AEs have typically a stronger interest in climate change mitigation than EMDEs, (ii) from an equity perspective, compensation is called for only if EMDEs are relatively small; (iii) there can also be an efficiency case for compensation, however, with AEs buying EMDEs out of some of their GHG emissions; (iv) ultimately, a superior option—for both the world’s climate and growth prospects—is the development of clean energy technologies by AEs and their transfer to EMDEs. The latter requires strong mitigation efforts by AEs even if EMDEs fail to play along initially. 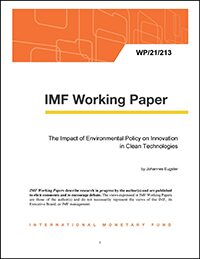 The Impact of Environmental Policy on Innovation in Clean Technologies
Johannes Eugster
This paper studies the effect of climate change mitigating policies on innovation in clean energy technologies. Results suggest that the tightening of environmental policies since the early 1990s have made a statistically and economically significant contribution to the increase in clean innovation. These effects generally materialized quickly, within 2 to 3 years of the policy change, and were driven by individually significant marginal effects of both market-based policies – such as feed-in tariffs and trading schemes – as well as non-market policies, such as R&D subsidies or emission limits. Looking at electricity innovation in particular, the paper finds that the estimated effect on total innovation is positive on net, meaning that increased innovation in clean and grey technologies is not offset by a decrease in innovation in dirty technologies. From a policy point of view, the paper’s results call for strong policy efforts to decisively shift innovation towards clean technologies.