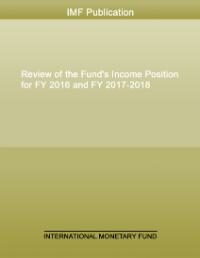 Review of the Fund's Income Position for FY 2016 and FY 2017-2018
International Monetary Fund
The Fund’s total net income for FY 2016 including surcharges is projected at about SDR 1.0 billion or some SDR 0.15 billion higher than expected in April 2015. Lending income continues to be the main source of income and is in line with April 2015 estimates. Investment income has fallen reflecting the decline in equity markets that exceeded the modest returns on fixed income securities. As a result of the 5-yearly review of key actuarial assumptions, the IAS 19 adjustment (relating to reporting of employee benefits) is expected to contribute about SDR 0.3 billion to net income in FY 2016. The paper recommends that GRA net income of SDR 1.1 billion for FY 2016 (which excludes projected losses of the gold endowment), be placed equally to the special and general reserve. After the placement to reserves, precautionary balances are projected to reach SDR 15.2 billion at the end of FY 2016. Following the completion of the Board’s review of the investment strategy for the Fixed-Income Subaccount, the paper further proposes to transfer currencies equivalent to the increase of the Fund’s reserves for FY 2014 and FY 2015 (totaling SDR 2.6 billion) and FY 2016 (estimated at SDR 1.1 billion), from the GRA to the Investment Account. The paper proposes that the margin for the rate of charge be set at 100 basis points for the two years FY 2017 and FY 2018. This follows a comprehensive review of the underlying factors relevant for the establishment of the margin this year and also takes into account the impact of the inclusion of the renminbi in the SDR basket on Fund income and borrowing costs. The projections for FY 2017 and FY 2018 point to a net income position of SDR 1 billion and SDR 0.7 billion, respectively. These projections are subject to considerable uncertainty and are sensitive to a number of assumptions.

The member countries of the International Monetary Fund collaborate to try to assure orderly exchange arrangements and promote a stable system of exchange rates, recognizing that the essential purpose of the international monetary system is to facilitate the exchange of goods, services, and capital, and to sustain sound economic growth. The paper reviews the stability of the overall system of exchange rates by examining macroeconomic performance (inflation, growth, crises) under alternative exchange rate regimes; implications of exchange rate regime choice for interaction with the rest of the system (external adjustment, trade integration, capital flows); and potential sources of stress to the international monetary system. 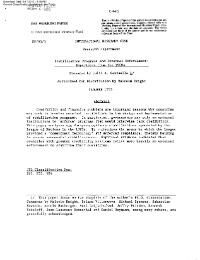 Stabilization Programs and External Enforcement: Experience From the 1920's
Julio A. Santaella
Credibility and financing problems are important reasons why countries may seek to involve external institutions in the design and implementation of stabilization programs. In particular, governments may rely on external institutions to ‘enforce’ programs that would otherwise lack credibility. This paper analyzes six European currency stabilizations sponsored by the League of Nations in the 1920s. It emphasizes the means by which the League provided a ‘commitment technology’ and enforced compliance, thereby helping to ensure successful stabilizations. Empirical evidence indicates that countries with greater credibility problems relied more heavily on external enforcement to stabilize their currencies.

Economic interdependence offers the potential for raising global welfare, but there is a fuzzy boundary between national interests and global objectives in the economic policy area. This paper examines the boundary area. It concludes that all international economic regimes must entail a mix of rules and discretion, and it considers the most appropriate weights to be given to rules and discretion.

This paper presents Selected Decisions and Selected Documents’ Supplement to Tenth issue of the IMF. This Supplement to the Tenth Issue of Selected Decisions of the IMF and Selected Documents contains decisions of a general nature adopted by the IMF since April 30, 1983, the date of publication of the Tenth Issue. Decisions of the IMF that are incorporated in the Rules and Regulations are not reproduced in this volume. The Executive Board approves the proposed method of applying the three-month rule for implementing the procedures for surveillance, set forth in EBD/83/161. The Executive Board has reviewed the document ‘Surveillance over Exchange Rate Policies’ as provided in paragraph 2 of the Executive Board Decision No. 5392-(77/63), adopted April 29, 1977, and will review it again at an appropriate time not later than April 1, 1986.