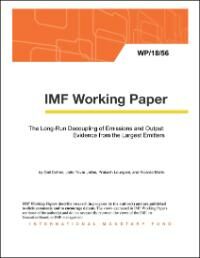 The Long-Run Decoupling of Emissions and Output: Evidence from the Largest Emitters
Gail Cohen, João Tovar Jalles, Mr. Prakash Loungani, and Ricardo Marto
For the world's 20 largest emitters, we use a simple trend/cycle decomposition to provide evidence of decoupling between greenhouse gas emissions and output in richer nations, particularly in European countries, but not yet in emerging markets. If consumption-based emissions—measures that account for countries' net emissions embodied in cross-border trade—are used, the evidence for decoupling in the richer economies gets weaker. Countries with underlying policy frameworks more supportive of renewable energy and climate change mitigation efforts tend to show greater decoupling between trend emissions and trend GDP, and for both production- and consumption-based emissions. The relationship between trend emissions and trend GDP has also become much weaker in the last two decades than in preceding decades.