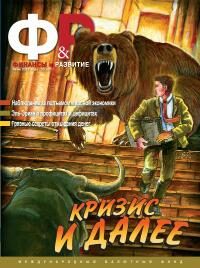 Finansy I razvitie, June 2012
International Monetary Fund. External Relations Dept.
Five years after the first stirrings of the crisis, some countries have recovered, but others are still struggling. F&D looks at the world today and sees a complex and mixed picture for the future of the world economy. In "Tracking the Global Recovery" we learn that most emerging markets seem to have moved on from the effects of the crisis, but most advanced economies have not. "Fixing the System" looks at how the pace of reforms to strengthen financial regulation has now slowed. World Bank trade economist Bernard Hoekman takes stock of incipient moves toward protectionism in "Trade Policy: So Far So Good?". "Bystanders at the Collapse" looks at how emerging markets and low-income countries weathered the global recession. Financier Mohamed El-Erian weighs in on the potential threat posed by large payment surpluses and deficits in "Stable Disequilibrium." Also in the magazine, we explore what's happening in commodities markets, assess the rise of green technologies, take a look at the shifts in South Asia's labor force, and uncover the harm money laundering can inflict on national economies. F&D's People in Economics series profiles Laura Tyson, Minder of the Gaps, and the Back to Basics series explains how money markets provide a way for borrowers to meet short-term financial needs.