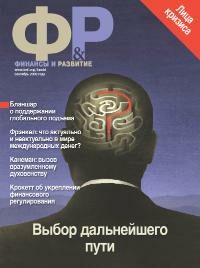 Finance & Development, September 2009
International Monetary Fund. External Relations Dept.
Recovery from the deepest recession in 60 years has started. But sustaining it will require delicate rebalancing acts, both within and across countries. IMF chief economist Olivier Blanchard writes in our lead article that the turnaround will not be simple. The crisis has left deep scars that will affect both supply and demand for many years to come. This issue of F&D also looks at what’s next in the global crisis and beyond. We look at ways of unwinding crisis support, the shape of growth worldwide after the crisis, ways of rebuilding the financial architecture, and the future of reserve currencies. Jeffrey Frankel examines what’s in and what’s out in global money, while a team from the IMF’s Research Department looks at what early warning systems can be expected to deliver in spotting future problems. In our regular People in Economics profile, we speak to Nobel prize winner Daniel Kahneman, whose work led to the creation of the field of behavioral economics, and our Picture This feature gives a timeline of how the Bank of England’s policy rate has fallen to its lowest level in 300 years. Back to Basics gives a primer on monetary policy, and Data Spotlight looks at how the crisis has affected the eastern European banking system.