The Pacific region was settled thousands of years ago, predominantly by Melanesian people in Papua New Guinea, Solomon Islands, and Vanuatu; Micronesians in Kiribati; both Melanesians and Micronesians in Fiji; and Polynesians in Tonga and Western Samoa. Most of the inhabitants resided in closely knit coastal communities, which were governed by powerful local chiefs. Fertile soil, except on coral atolls, and plentiful fish enabled living standards to be kept above subsistence levels in these economies. An ample diet, in terms of calories and protein, and a generally equable climate contributed to relatively long life expectancy. Explorers from Spain and Portugal in the sixteenth century, from the Netherlands in the seventeenth century, and from the United Kingdom in the eighteenth century were primarily interested in trade in precious metals and spices. Except for the spread of diseases, against which local inhabitants lacked immunity, the life of the region was unaffected by these contacts.

Fiji covers a land area of 18,000 square kilometers in the South Pacific, midway between Hawaii and Australia. The country is made up of about 400 islands, of which the two largest comprise 90 percent of the total area and population. Owing to its volcanic origin, about four fifths of the land is mountainous and unsuitable for cultivation, but contains forests, mineral resources, and hydroelectric potential. Agricultural land is fertile with plentiful rainfall, although it is subject to drought and cyclones.

The Republic of Kiribati consists of 33 islands, with a land area of 726 square kilometers, widely scattered over the Central Pacific Ocean on both sides of the equator and the international dateline. The population of 66,000 is 98 percent Micronesian. The Gilbert group, where nearly all of the population resides, is a chain of 16 islands extending for 700 kilometers in a northwesterly to southeasterly direction. The Phoenix group is 1,600 kilometers to the east and is presently uninhabited. The Line group is 3,000 kilometers to the east and only the three northern islands are inhabited. Although the land mass is very small, the 200-mile economic zone around the islands covers an area of more than 3 million square kilometers, a much larger share of the ocean than enjoyed by any other country in the region.

Papua New Guinea comprises the eastern half of the island of New Guinea and several hundred islands to the east and north. The land area is 463,000 square kilometers and the population of 3.6 million is largely Melanesian. Resources include plentiful arable land, extensive forests, rich mineral deposits, and hydroelectric potential. However, much of the terrain is mountainous, which makes travel and communications difficult. The population density is only eight persons per square kilometer and substantial areas of the interior remain unexplored. There are some 700 local languages, and allegiances are closely tied to villages. While social obligations differ among kinship groups, most land is communally owned and members assist others in need. For many inhabitants, contact with the modern world is recent and access to health, education, and other social facilities remains limited. Life expectancy is 52 years and poverty is more pronounced than in other Pacific island countries.

Solomon Islands is a scattered archipelago with a land area of 28,000 square kilometers that stretches across 1,500 kilometers of the South Pacific Ocean. The six main islands, which range up to 200 kilometers in length and 50 kilometers in width, account for 80 percent of the total area. Most of the islands are characterized by precipitous mountain ranges covered with dense tropical forest and intersected by deep and narrow valleys. Rivers are generally narrow and unnavigable, and the coasts are surrounded by extensive coral reefs and lagoons. Rainfall is heavy, and cyclones periodically cause considerable damage to settlements and crops.

The Kingdom of Tonga consists of 172 volcanic and coral islands, of which 36 are inhabited, with a total land area of 750 square kilometers. Most of the land is fertile and subject to intensive cultivation; the islands are vulnerable to cyclones. Almost one fourth of the inhabitants live in the capital, Nuku’alofa. The population, which is almost entirely of Polynesian origin, has declined in recent years to 95,000, despite a high birth rate, because of large-scale emigration. Among other Pacific island countries, only Western Samoa has experienced a comparable degree of emigration. At present, at least 30,000 Tongans live abroad, mainly in Australia, New Zealand, and the United States, and send substantial remittances to relatives at home. The family-oriented and closely knit traditional nature of Tongan society, with its inherent sharing of income, alleviates poverty and social problems associated with the lack of employment opportunities. Life expectancy is 64 years and health and education indicators are in line with or above the regional average. Annual per capita GDP is about SDR 650.

The Republic of Vanuatu, previously known as the New Hebrides, is an archipelago of some 80 small islands, with a land area of 12,000 square kilometers. The population of 140,000 is 94 percent Melanesian; the expatriate community consists mainly of Europeans, Chinese, and Vietnamese. Population growth has exceeded 3 percent annually in recent years. Most people live on the coastal plains where the soil is fertile and the rainfall predictable. The largest concentration of population is in the capital, Port Vila. Cultivation of the interior is difficult because of the mountainous terrain. There are more than 100 different languages. The traditional society is characterized by strong clan affinities and religious beliefs. Education indicators are below the regional average, including high illiteracy rates and low primary school enrollment.

Western Samoa, with a land area of 2,800 square kilometers, consists of nine islands that are volcanic in origin, tropical in climate, and centrally situated in the South Pacific. Virtually all of the population of 160,000 is of Polynesian origin and resides in settlements along the coastline of the two main islands. Life expectancy is 65 years and health and education standards are above the regional norm. Despite a relatively high birth rate, population growth has averaged less than 1 percent annually during the 1970s and 1980s. Slow growth of output and employment problems have resulted in steady emigration, mainly to New Zealand but also to Australia and the United States. While this emigration has forestalled serious unemployment and pressures on cultivatable land, shortages of skilled labor are evident throughout the country.

This book, by Christopher Browne with Douglas A. Scott, reviews the economic progress that Fiji, Kiribati, Papua New Guinea, Solomon Islands, Tonga, Vanuatu, and Western Samoa have made since independence. An overview of the region examines development strategies, external economic relations, the role of the private sector, and the evolution of financial structures. Seven country studies describe the main characteristics of each economy, analyze performance over the past decade, and provide detailed statistics suitable for cross-country comparison. 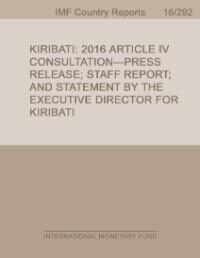 Kiribati is a small and fragile state vulnerable to climate change. Record high fishing revenue in recent years has boosted growth, improved the current account, and strengthened the balance of the sovereign wealth fund, the primary vehicle for intergenerational saving. However, fishing revenue has declined in the early months of 2016 and is projected to remain at more modest levels over the medium term. Building fiscal buffers to enhance resilience and continued support from development partners are essential to mitigate downside risks to growth.