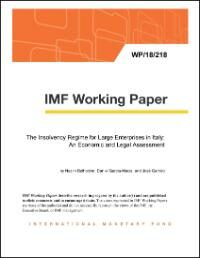 The Insolvency Regime for Large Enterprises in Italy: An Economic and Legal Assessment
Nazim Belhocine, Mr. Daniel Garcia-Macia, and José Garrido
The modernization of Italy’s insolvency framework has been the subject of much interest in recent years, related not least to its role in potentially facilitating an efficient allocation of resources. A unique feature of Italy’s insolvency framework is a special regime for large enterprises known as “extraordinary administration”. This paper evaluates the merits of this special regime by assessing its efficacy and success in achieving its stated goals and comparing its features to international standards and best practices. It finds that the special regime tends to impose large costs on creditors and the state. The regime results, in most cases, in the sale of parts of the group, followed by a liquidation phase of the remaining assets which can take longer than the general regime, hindering legal certainty for creditors and more generally economic efficiency, investment and job creation. Based on international best practices and experience, consideration should be given to folding the special regime into the general insolvency regime, possibly with provisions to allow for state intervention in specific well-defined circumstances. 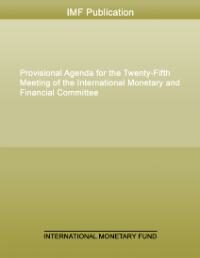 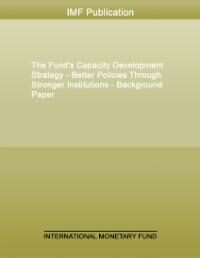 The Fund's Capacity Development Strategy - Better Policies Through Stronger Institutions - Background Paper
International Monetary Fund
This supplement provides background information on various aspects of capacity development (CD) for the main Board paper, The Fund’s Capacity Development Strategy—Better Policies through Stronger Institutions. It is divided into nine notes or sections, each focused on a different topic covered in the main paper. Section A explores the importance of institutions for growth, and the role the Fund can play in building institutions. Section B presents stylized facts about how the landscape for CD has changed since the late 1990s. Section C discusses the difficulties of analyzing CD data because of measurement issues. Section D provides a longer-term perspective on how Fund CD has responded to member needs. Section E contains information on previous efforts to prioritize CD, assesses Regional Strategy Notes (RSNs) and country pages, and suggests ways to strengthen RSNs, including by using the Fund’s surveillance products. Section F compares the technical assistance (TA) funding model proposed in the 2011