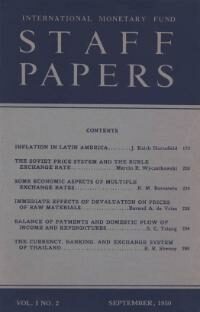 IMF Staff Papers: Volume 1, No. 2
International Monetary Fund. Research Dept.
This paper focuses on various aspects of inflation in Latin America. Among short-run factors, World War II considerably affected the balance of payments of Latin American countries and thus indirectly their inflationary situation. Inflation in a greater or less degree has long been characteristic of many Latin American countries. A high propensity to consume implies either a high multiplier or a high propensity to import. In normal times, the latter was more usual, since the supply of consumers' goods in these countries was rather inelastic. In countries where controls over consumption and investment are strict and efficient, there is a tendency for inflation to give rise to substantial holdings of cash, bank deposits, and other relatively liquid assets in excess of those which would voluntarily be held by business and consumers. In countries such as those of Latin America, where controls have not been very effective, this tendency toward excess liquidity is noticeably smaller. Nevertheless, it is still a factor to reckon with, because involuntary hoarding may be the result of the impossibility of obtaining desired commodities or supplies, even though there is no rationing or similar system in operation. In Latin America during the war the inevitable curtailment of imports did in this way bring about a condition of latent inflation.