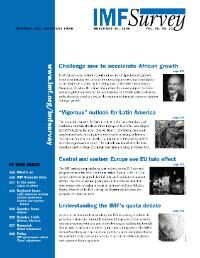 At the recent IMF–World Bank Annual Meetings in Singapore, the IMF’s 184 Governors debated Managing Director Rodrigo de Rato’s proposal for governance reform. His strategy, endorsed by an overwhelming majority of the governors, involved ad hoc quota increases for four countries—China, Korea, Mexico, and Turkey—whose calculated quotas are most seriously out of line with their actual quotas, and a two-year work program on a new quota formula. The IMF is hoping that its Executive Board will reach agreement by the fall of 2007 on a new formula to be implemented by the 2008 Annual Meetings.