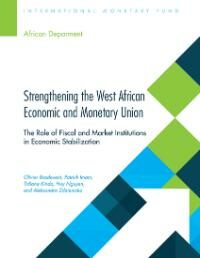 Strengthening the West African Economic and Monetary Union: The Role of Fiscal and Market Institutions in Economic Stabilization
Olivier Basdevant, Patrick A. Imam, Mr. Tidiane Kinda, and Ms. Aleksandra Zdzienicka
West African Economic and Monetary Union (WAEMU) countries face a well-known dilemma between the need to provide shock-smoothing mechanisms and the lack of adequate mechanisms to do so. WAEMU countries are subject to frequent and, to a large extent, asymmetric shocks. They have remained poorly diversified and vulnerable to external shocks, such as changing weather conditions. In addition to limited shock-smoothing mechanisms at the regional level, WAEMU members’ ability to respond to shocks through national policies is also constrained by limited fiscal space and the need to preserve external stability—not only at the national level but also at the union level. In this context, developing a well-defined fiscal rule framework at the national level would help to build the necessary fiscal space for shock-smoothing. In addition, the development of specific shock-smoothing mechanisms—including a more developed and integrated financial sector—would also be critical. In addition, promoting financial development is also a challenge, which needs to be addressed in tandem with an adequate surveillance system. Some of these challenges have been faced by other monetary unions, such as the euro area.