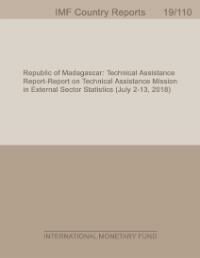 Republic of Madagascar: Technical Assistance Report—Report on Technical Assistance Mission in External Sector Statistics (July 2-13, 2018)
International Monetary Fund. Statistics Dept.
This Technical Assistance report highlights that the mission visited Madagascar to aid in the external sector statistics (ESS), including the balance of payments and international investment position (IIP). The mission focused on assisting improving the coverage of IIP by better using the administrative sources or by identifying new data sources for private sector. A more sustained effort must be applied to the collection system to ensure the timelier submission of data of adequate quality. The compilation of the quarterly ESS, which is one of the main ESS objectives, requires both an increase in the number of compilers and a change of approach in the collection of source data. The quarterly data are compiled on the basis of the ESRI and should be supplemented by the collection of quarterly data using a simple survey of major public and private enterprises. The mission recommended a detailed one-year action plan with a set of priority recommendations carrying particular weight to make headway in improving the ESS. 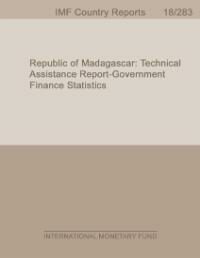 Republic of Madagascar: Technical Assistance Report-Government Finance Statistics
International Monetary Fund. Statistics Dept.
This mission’s goal was to have the Malagasy authorities adopt the methodology of the Government Finance Statistics Manual (GFSM) 2014 for their own needs. The desired outcome of adopting the manual is to develop a set of government finance statistics (GFSs) that are consistent with current international standards in order to conduct a macroeconomic analysis of government finance. 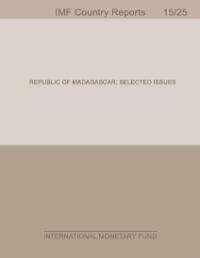 Republic of Madagascar: Selected Issues
International Monetary Fund. African Dept.
This Selected Issues paper presents a study on poverty in Madagascar. Madagascar is a country with general, widespread, and increasing poverty. Most of the population is extremely poor and struggling to pay for food. Madagascar has the potential to grow rapidly. It is endowed with abundant natural resources, a unique wildlife, and a young, vibrant, and rapidly growing population. Taking full advantage of the young population will require higher investment in education and healthcare. Economic inequality appears to have declined and the poorest have in fact increased their consumption. Thus, while it is true that more people are poor today than in 2001, on average those who are deepest into poverty appear to be economically better off today than in 2001. Poverty is primarily a rural challenge. An overriding majority of the population lives in rural areas and rural poverty rates are almost double those of urban areas. 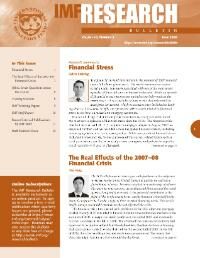 IMF Research Bulletin, September 2009
International Monetary Fund. Research Dept.
The Q&A in this issue features seven questions about policy options for emerging market countries (by Marcos Chamon, Chris Crowe, and Jun Il Kim); research summaries on “Does Trade and Financial Globalization Cause Income Inequality?” (by Chris Papageorgiou) and “The Current Account of Oil-Exporting Countries (by Irineu E. de Carvalho Filho); an article on the launch of the IMF’s new research journal, IMF Economic Review, and the contents of the upcoming IMF Staff Papers, which the new the new journal will succeed in 2010; an article on the upcoming Tenth Annual Jacques Polak Research Conference; a listing of visiting scholars at the IMF during July–September 2009; and listings of recent IMF Working Papers and Staff Position Notes. 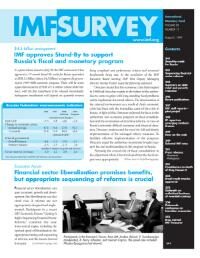 IMF Survey: Volume 28, Issue 15
International Monetary Fund. External Relations Dept.
In a press release issued on July 28, the IMF announced it has approved a 17-month Stand-By credit for Russia equivalent to SDR 3.3 billion (about $4.5 billion) to support the government’s 1999–2000 economic program. There will be seven equal disbursements of SDR 471.4 million (about $640 million), with the first installment to be released immediately. Subsequent installments will depend on quarterly reviews being completed and performance criteria and structural benchmarks beingmet. At the conclusion of the IMF Executive Board meeting, IMF First Deputy Managing Director Stanley Fischer made the following statement.