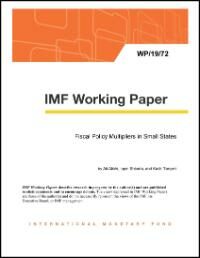 Fiscal Policy Multipliers in Small States
Ali Alichi, Mr. Ippei Shibata, and Kadir Tanyeri
Government debt in many small states has risen beyond sustainable levels and some governments are considering fiscal consolidation. This paper estimates fiscal policy multipliers for small states using two distinct models: an empirical forecast error model with data from 23 small states across the world; and a Dynamic Stochastic General Equilibrium (DSGE) model calibrated to a hypothetical small state’s economy. The results suggest that fiscal policy using government current primary spending is ineffective, but using government investment is very potent in small states in affecting the level of their GDP over the medium term. These results are robust to different model specifications and characteristics of small states. Inability to affect GDP using current primary spending could be frustrating for policymakers when an expansionary policy is needed, but encouraging at the current juncture when many governments are considering fiscal consolidation. For the short term, however, multipliers for government current primary spending are larger and affected by imports as share of GDP, level of government debt, and position of the economy in the business cycle, among other factors. 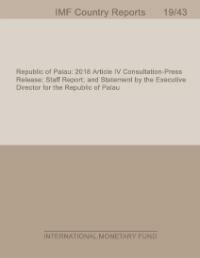 Republic of Palau: 2018 Article IV Consultation-Press Release; Staff Report; and Statement by the Executive Director for the Republic of Palau
International Monetary Fund. Asia and Pacific Dept
This Article IV Consultation discussions with the Republic of Palau focused on ensuring long-term fiscal sustainability, making potential growth more resilient and sustainable, and preserving financial stability and facilitating credit extension. The consultation discussions also highlight that the main economic policy priorities for Palau are to develop a medium-term fiscal framework and strategy to help manage fiscal risks and the expiration of the Compact grants, to raise public investment, to protect social spending, to make growth more resilient and sustainable through other reforms, and to preserve financial stability and integrity. The current fiscal policy approach is based on the legal requirement to maintain a balanced or surplus cash flow for various parts of the budget. While this fiscal policy strategy has resulted in overall budget surpluses and a decline in net debt, the move to a medium-term fiscal framework and strategy would help Palau to address future challenges. 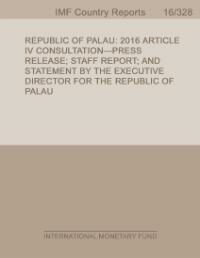 Palau is a middle-income micro state in the Pacific (population: 18,000) that relies heavily on tourism and grants, and is exposed to natural disasters. The economy grew strongly at 9.4 percent in FY2015 led by robust tourism and construction activity, but the surge in tourist arrivals strained infrastructure and was tilted to low budget tourism. The fiscal position has improved, but further efforts are needed to ensure long-term fiscal sustainability. The outlook is favorable although subject to significant downside risks. The discussions focused on

Republic of Palau: 2016 Article IV Consultation-Press Release; Staff Report; and Statement by the Executive Director for the Republic of Palau
International Monetary Fund. Asia and Pacific Dept
This 2016 Article IV Consultation highlights that Palau’s economy has performed well in recent years. The economy grew strongly in FY2015 (ending September 30, 2015) at 9.4 percent, with tourist arrivals and construction activity expanding by 35 percent. However, the rapid rise in tourism activity strained infrastructure and was tilted toward low budget tourists, which led the authorities to limit the number of charter flights in FY2016. The outlook for Palau is also favorable. Economic growth is expected to slow temporarily to zero in FY2016 as tourist arrivals decline, but to rebound to 5 percent in FY2017 as tourism activity recovers with the entry of new hotels and construction picks up.