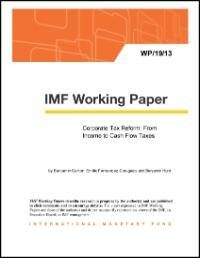 Corporate Tax Reform: From Income to Cash Flow Taxes
Benjamin Carton, Emilio Fernández Corugedo, and Mr. Benjamin L Hunt
This paper uses a multi-region, forward-looking, DSGE model to estimate the macroeconomic impact of a tax reform that replaces a corporate income tax (CIT) with a destination-based cash-flow tax (DBCFT). Two key channels are at play. The first channel is the shift from an income tax to a cash-flow tax. This channel induces the corporate sector to invest more, boosting long-run potential output, GDP and consumption, but crowding out consumption in the short run as households save to build up the capital stock. The second channel is the shift from a taxable base that comprises domestic and foreign revenues, to one where only domestic revenues enter. This leads to an appreciation of the currency to offset the competitiveness boost afforded by the tax and maintain domestic investment-saving equilibrium. The paper demonstrates that spillover effects from the tax reform are positive in the long run as other countries’ exports benefit from additional investment in the country undertaking the reform and other countries’ domestic demand benefits from improved terms of trade. The paper also shows that there are substantial benefits when all countries undertake the reform. Finally, the paper demonstrates that in the presence of financial frictions, corporate debt declines under the tax reform as firms are no longer able to deduct interest expenses from their profits. In this case, the tax shifting results in an increase in the corporate risk premia, a near-term decline in output, and a smaller long-run increase in GDP.