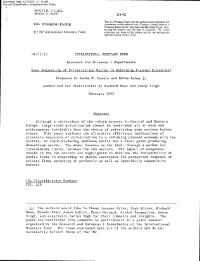 Does Sequencing of Privatization Matter in Reforming Planned Economies?
Mr. Aasim M. Husain and Ms. Ratna Sahay
Although a centerpiece of the reform process in Central and Eastern Europe, large-scale privatization cannot be undertaken all at once and policymakers inevitably face the choice of privatizing some sectors before others. This paper analyzes the allocative efficiency implications of alternate sequences of privatization in a reforming planned economy with two sectors—an input-producing upstream sector and a final goods-producing downstream sector. The model focuses on the link, through a market for intermediate inputs, between the two sectors. The impact of exogenous shocks to the two sectors are highlighted to show how the inflexibility of public firms in responding to shocks constrains the production response of private firms operating in perfectly as well as imperfectly competitive markets.