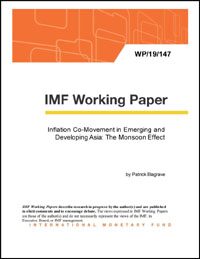 Inflation Co-Movement in Emerging and Developing Asia: The Monsoon Effect
Patrick Blagrave
Co-movement (synchronicity) in inflation rates among a set of 13 emerging and developing countries in Asia is shown to be strongest for the food component, partly due to common rainfall shocks—a result which the paper terms the ‘monsoon effect.’ Economies with higher trade integration and co-movement in nominal effective exchange rates also experience greater food-inflation co-movement. By contrast, cross-country co-movement in core inflation is weak and the aforementioned determinants have little explanatory power, suggesting a prominent role for idiosyncratic domestic factors in driving core inflation. In the context of the growing literature on the globalization of inflation, these results suggest that common weather patterns are partly responsible for any role played by a so-called ‘global factor’ among inflation rates in emerging and developing economies, in Asia at least.

Summary Proceedings of the Fifteenth Annual Meeting of the Board of Governors, 1960
International Monetary Fund. Secretary's Department