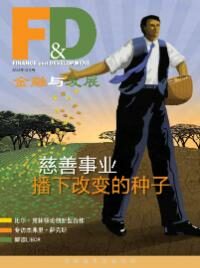 Finance & Development, December 2012
International Monetary Fund
By combating malaria with mosquito nets or building schools and providing basic sanitation, philanthropy is helping transform the developing world. Rich donors are devoting fortunes—many of them earned through computer software, entertainment, and venture capitalism— to defeating poverty and improving lives, supplementing and in some cases surpassing official aid channels.From billionaires Bill and Melinda Gates and Warren Buffett to Aliko Dangote and George Soros, the titans of capitalism are backing good causes with their cash. Whether financing new vaccines, building libraries, or buying up Amazon rain forest to protect the environment, philanthropists are supporting innovations and new approaches that are changing lives and building dreams.This issue of F&D looks at the world of targeted giving and social entrepreneurship.“ Philanthropy’s role is to get things started,” says Microsoft co-founder Bill Gates, who is the world’s most generous giver. “We used foundation funds to set up a system to make market forces work in favor of the poor.” He says that catalytic philanthropy can make a big difference. “Good ideas need evangelists. Forgotten communities need advocates.” Former U.S. President Bill Clinton tells us that networks of creative cooperation between government, business, and civil society can get things done better to solve the world’s most pressing problems.Also in this issue, Prakash Loungani profiles superstar economist Jeffrey Sachs, who helped campaign for debt relief for developing economies and championed the Millennium Development Goals. We look at how, instead of spending commodity price windfalls on physical investments, which are often sources of corruption, governments of poor countries are sometimes well advised to hand some of the income over to their citizens. We examine moves by major central banks to ease our way out of the crisis enveloping advanced economies in our Data Spotlight column, and we hear about how China’s growth inspires creativity in the West.