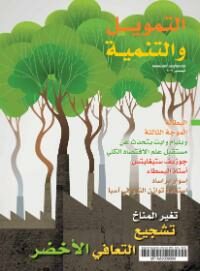 Finance & Development
International Monetary Fund. External Relations Dept.
Climate Change: Stimulating a Green Recovery” looks at the global problem of climate change. With the world apparently on an economic recovery path, policymakers are looking at ways to limit the impact of climate change through broad international action. One of the challenges is to balance actions to mitigate climate change with measures to stimulate growth and prosperity. This issue of F&D also examines a variety of issues raised by the crisis—including the future of macroeconomics, explored by William White, former chief economist at the Bank for International Settlements, and the longer-term impact of the crisis on the United States, the world’s largest economy. Our “People in Economics” profile spotlights Joseph Stiglitz, the Nobel Laureate who “can’t get any respect at home.” We also look at the need for rebalancing growth in Asia, which is leading the world out of recession, and we interview five influential Asians on the region’s fragile rebound. We turn our “Straight Talk” column over to Barbara Stocking of Oxfam, who makes a forceful case for stepping up help to the most vulnerable around the world. “Data Spotlight” looks at trends in inflation, which has fallen into negative territory in some countries during the crisis, and in “Point-Counterpoint,” two experts discuss the pros and cons of remittances—funds repatriated by migrant workers to family and friends back home. “Back to Basics” gives a primer on international trade.